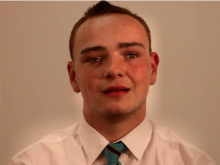 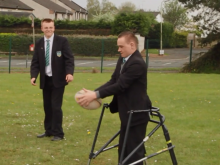 Daniel plays rugby in a scene in the Fixers film 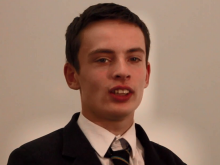 A young person in the film

Keen to show that those living with disabilities aren’t incapable, Daniel Traylor is tackling the assumptions people make about what others like him can and can’t do.

The 17-year-old, who has cerebral palsy, and his team from Ballymena, County Antrim want to be treated equally and with respect.

‘My condition means that I rely on a walking frame to get around, which can be quite challenging,’ explains Daniel.

‘I’m a big sports fan, but a lot of the time people look at me and think, “He can’t do that,” which is demoralising.

‘I can’t do everything that other people do, but it’s hurtful when they automatically think that’s the case.

‘It’s all about having the opportunity to take part in something without being judged, which is what our campaign is about.’

With Fixers, the group have helped create a short film to show how those with disabilities can feel marginalised by society.

Young people in the film urge viewers to accept them for who they are and allow them the opportunity to try things for themselves.

Watch their film 'Let's Try' at the top of this page.

‘Everyone loves the film,’ says Daniel.

‘It was important to get the views of others with similar experiences, so people know how their comments can make us feel.

‘Hopefully this will go some way towards changing these negative perceptions and will encourage us all to respect each other.’

As well as sharing the film on social media, the team plan to screen it at Castle Tower School in Ballymena, where they attend, on Monday 15th September during a whole school assembly.

‘We’ve enjoyed working with Fixers and have learnt so much,’ adds Daniel.

‘Hopefully the film will make others think twice about judging people who are disabled.

‘We might not be the best at everything, but all we want is a chance to try.’