Inside Epilepsy Fix on ITV 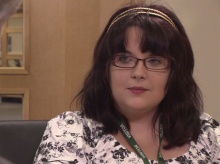 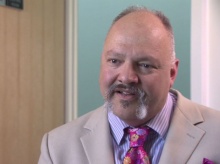 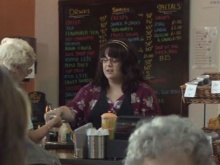 Chantelle at the cafe where she volunteers

Diagnosed with epilepsy at the age of thirteen, Chantelle Williams is hoping to educate the public about the condition, so they can recognise the different forms of seizure.

The 21-year-old from Weston-super-Mare is concerned that many people are unable to identify an epileptic seizure and would not know how to react in the event of one occurring.

‘It’s really important for people to realise that there are different forms of epilepsy,’ explains Chantelle.

‘There’s a huge variation in how epilepsy affects people. Sometimes a seizure can be very obvious and sometimes it might not be at all.

‘It can be a couple of seconds or a minute when you black out and don’t really remember what you’re doing or where you are.

‘At other times, it can be something that most people will recognise, because it’s when someone has fallen to the floor and is having convulsions.’

With Fixers, Chantelle is hosting seminars to educate others on the condition, with high priority being placed on information sessions for people in the workplace.

'At the seminar I want to show a Fixers film which will provide key information on how to deal with an epileptic seizure,’ she explains.

‘I do get frustrated that epileptics find that they are only able to do voluntary work.

‘One of the things I hope will come of the project is to help employers understand that epilepsy isn’t so restricting.

‘Then they may be encouraged to employ people who have the condition.’

‘Epilepsy is actually much more common than people realise.

‘Probably about one in a hundred people will become epileptic at some point in their life.

‘I think projects such as this are absolutely vital. Many people have seizures and they’re never properly recognised either by their family, friends, people that they work with or teachers.'

Chantelle adds: ‘I think if people were better educated then they wouldn’t have to be so scared - if they saw someone have a seizure, they would know exactly what to do.

‘It makes me feel great that I can help as many people as possible that may have epilepsy, to try and make it easier for them to have a normal life.’