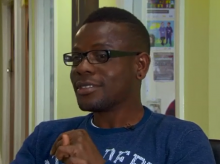 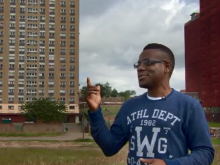 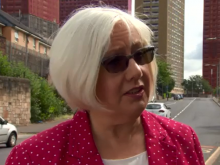 A set of iconic tower blocks in Glasgow, once notorious for crime, are now being seen as a beacon of hope for many including Nigerian refugee Emmanuel Anuforo.

His story was broadcast on STV Glasgow’s Riverside Show on Tuesday 1st July.

After fleeing persecution ten years ago, the 23-year-old was welcomed as a penniless stranger and given a home at the infamous Red Road flats, which now face demolition.

Determined to quash the negative image these 25-storey blocks have gained over the years, he’s sharing his story of adversity to show how living there gave him hope for the future.

‘I grew up in Nigeria, where there was a lot of hatred and innocent people died for no reason,’ explains Emmanuel.

‘When I came to this flat in Glasgow, I’d begin to imagine what my future was going to be.

'I had a new dream, a fresh chance.

‘My intention is to show people that no matter your situation, if you believe in yourself, work hard and are positive, you will make it in life.’

‘My family were one of the first to move there in 1966 when it was opened,’ she says.

'There were all sorts of gadgets and innovative things that made it quite an exciting place for children.

'It was a quick and very rapid deterioration that occurred. Elements of bad design as much as anything else made it a very difficult place to live for a while.'

Although Emmanuel has since moved out of the area, he considers his time living at Red Road as positive, despite the troubled history the towers have had.

‘At night I would look out the window around the city and think this is the real land I’ve been dreaming of.  Here is a safe place for me.

‘I want to show people that even when times are really hard, and people feel like there's nothing left, they can find hope.’