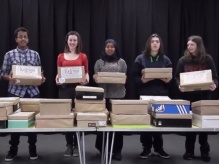 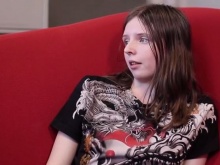 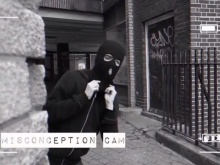 Keen to challenge negative perceptions of refugees, Tori Baker and her team from Bristol want those arriving in the UK to receive a warmer welcome.

‘This issue is important to us because it seems unfair that refugees should be treated differently – or badly,’ explains 18-year-old Tori.

‘I think some people do believe the myths because it’s something they haven’t been through.

‘People are more likely to make things up when it’s an issue they don’t understand.’

With Fixers, the group have created a film to contest the negative stereotypes attached to people forced to flee their homes for fear of persecution.

Using a ‘misconception cam’ and stating facts, Tori and her team address and disprove each myth individually.

In the video, the Fixers explain that they’ve also launched another appeal to help people coming here to settle into their new surroundings.

‘We’ve been making shoeboxes to be given to the Red Cross to pass on to refugees and asylum seekers,’ says Tori.

‘They contain essential supplies and we’ve been around local businesses asking for donations.

‘People understand what we’re trying to do and they’ve been very willing to help.’

The group plan to show their film in local schools and colleges to inform young people and encourage them to be more open-minded.

Watch the film ‘Refugee Myth Busting’ at the top of this page.

‘I think the video is very good – it gets our point across and gives plenty of information,’ adds Tori.

‘I hope our campaign will help young people understand what refugees go through.

‘Hopefully it will encourage others to treat them better.’