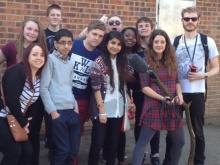 Members of the Crawley group with the Fixers crew 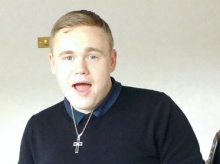 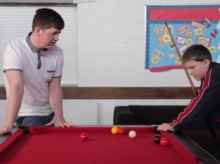 Launching their campaign against homophobia, a team of Fixers from West Sussex want people to stop using the word ‘gay’ to describe things negatively.

The group are challenging young people who use the term in a way that could cause offence.

‘We got together as a group and discussed what we thought were the prominent issues in the local community,’ explains 17-year-old lead Fixer Sam Trumpeter.

‘We all agreed that homophobia is one of these issues.

‘We hope to help other young people realise that simply using a word in the wrong context can have a big effect on someone – whether they meant it to or not.’

With Fixers, the team have created a film to show that although there are different definitions of ‘gay’, none of them are negative. In one example, the meaning given is ‘light-hearted or carefree’.

The film features a number of scenarios where the term is used in a positive way.

Members of the group, who are all members of the Crawley Youth Voice Network, are heard using it to describe how they feel when passing a driving test or succeeding at a job interview.

‘Our film highlights the fact that a lot of people use the word ‘gay’ to mean something negative,’ Sam says.

‘We flipped that and included scenes with the word ‘gay’ being used in a positive way.

‘I’m really pleased with the end product. I think they are situations that young people can relate to, so hopefully they will take it all in.’

The Fixers want to show their film during the workshops they plan to deliver in schools. As well as aiming these sessions at pupils, they hope to target teachers who may not pick up on the occasions when students use derogatory language.

Sam adds: ‘Taking part in this project has made me realise what you can achieve when a group gets together.

‘When you have a common objective and work towards a goal, you get a really good end piece.’

Cassie Guy's been on the receiving end of homophobic name-calling.
See what she’s doing to prevent others going through the same.