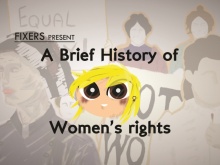 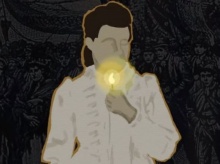 A still from the Fixers animation 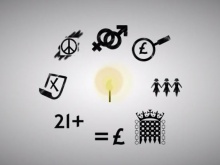 The film marks a series of gender equality milestones

Passionate about gender equality, Cardiff Fixer ‘Eliza Clare’ wants to take her campaign for women’s rights all the way to the Senedd.

The 17-year-old, whose real name has not been used as she wishes to remain anonymous, hopes her views on the topic will be heard by members of the National Assembly for Wales.

‘I want to highlight that the fight for women’s rights goes on,’ Eliza explains.

‘Despite progress there is still sex discrimination in terms of the jobs women have and their political power.’

With Fixers, Eliza has created a film tracking the history of women’s rights.

Beginning in 1888 with the London Match Girls’ Strike, a series of milestones relating to gender equality are explained in the animation.

Viewers are introduced to key players including Annie Besant, Mary Barbour and Constance Markievicz and are given the background to equal voting rights and equal pay.

Watch Eliza’s film ‘A Brief History of Women’s Rights' at the top of this page.

‘I like the animation with its mixture of 2D images, computer pictures and photographs,’ says Eliza.

‘I hope the film will be educational.

‘By telling the story of these inspirational women, I want to convince the audience to think about our world now and what needs to be changed.’

Concerned there are still challenges to overcome in order for all women to enjoy certain liberties, Eliza is encouraging others her age to take an interest in gender equality.

She wants the teachers at her school to use the film and hopes it will help members of the National Assembly understand the importance of the issue for young people today.

Eliza adds: ‘I care deeply about the well-being of others and about achieving justice for all – particularly for women.

‘It is important to be aware that sex discrimination still continues today.’

The campaign for gender equality is also important to Hannah and her team
from South Wales. See how they’re tackling stereotyping in sport.