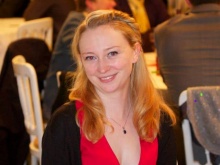 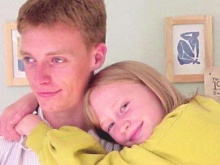 Moira and her brother Iain 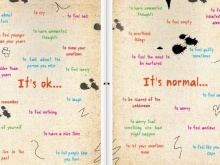 The leaflet contains suggestions on how to cope with grief

A young woman from Norwich, who felt she had to conceal her emotions after losing a family member, is encouraging people to be more open about the topic of bereavement.

Understanding the difficulties of dealing with grief alone, Moira Hickson (24) is using the power of support to make sure others in similar situations don’t feel so isolated.

‘My older brother Iain died when I was just eleven,’ explains Moira.

‘I felt there wasn’t much support around for me at the time.

‘I quickly became embarrassed about my emotions and turned my bereavement into depression and anxiety.’

Wanting others to understand the ramifications of grief upon mental health, Moira has created an informative booklet with the help of Fixers.

She hopes the resource will also guide those who are struggling with loss learn how to cope.

‘I want to help others by telling them my story and letting them know they are not alone.

The booklet contains personal stories by young people who have lost a loved one, and contains suggestions for ways to cope with the grief.

Take a look at Moira's Fixers resource 'You're Not Alone' below.

Moira hopes to distribute her project in areas where they would be easily accessible to those who may be in need.

‘I hope that I can help other young people by distributing the finished project in schools, doctors surgeries and youth clubs.

‘I also want to hand them out in the city centre to make people aware of the availability of this book.’

If you need support or someone to talk to, contact Cruse Bereavement Care, Nelson's Journey or Samaritans.

Jasmine Crayton and her group from Cornwall are also helping young people cope with bereavement. Read their magazine 'Break It Down' here.