Scared by the Bell 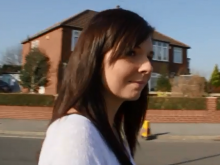 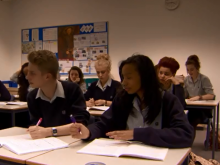 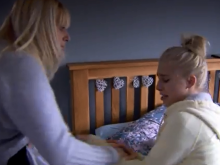 Reconstruction from film showing girl refusing to go to school

Summer Garcia (21) from Leeds wants more people to recognise school phobia as a legitimate and serious condition, after she says it took over and ruined her teenage years.

Initially triggered by a panic attack on her first day of high school at the age of ten, she says the idea of going back became a terrifying notion.

Overcome by extreme anxiety, she refused to return from that day on.

‘I was feeling nervous all morning, which is normal on your first day of school.

'But when I got into class, I felt this overbearing sense of fear come out of nowhere and knew I had to get out,’ explains Summer.

‘My mum would try and force me to go, but I would literally kick and scream at her.

‘I felt so scared but no idea what I was scared of.

‘My hope is that people understand that this is a genuine condition and not just young people playing truant.’

With the help of Fixers and her team, Summer has used her personal experiences to create a film giving people a better insight into such anxiety disorders.

Watch Summer's film 'School phobia' at the top of this page.

'At first, I was quite worried about sharing my story and re-living those old memories,’ she says.

'But Fixers have done a great job with the film and it really captures my message perfectly.

‘I felt it was important to show the public that these conditions are real and do affect people.'

Summer, who was largely tutored at home, now wants to go back to her old school and share her Fixers film.

She hopes it will help teachers better understand such conditions and give young people experiencing such issues the right information on where to find help.

‘Looking back, I sometimes wonder, was that actually me?’ adds Summer. ‘That’s why taking my film into schools with a new mind-set would be a great chance to move on from my past.

‘If my campaign increases people’s understanding of anxiety disorders like this, then the time I lost growing up wouldn’t feel as wasted.’

Jake Land has lived with extreme anxiety since childhood.
Watch his TV story...