A Tribute To Stephen 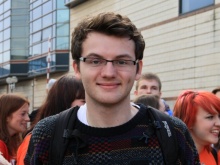 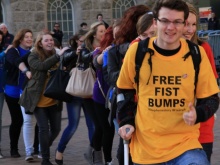 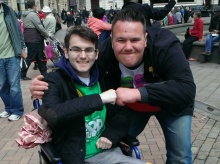 A fist bump from Stephen on National Good Gestures Day

Having touched the lives of thousands, if not millions, of people since being diagnosed with cancer more than three-and-a-half years ago, Stephen Sutton has sadly died at the age of 19, leaving a lasting legacy.

Announcing the news on social media, Stephen's mother Jane wrote: ‘My heart is bursting with pride but breaking with pain for my courageous, selfless, inspirational son who passed away peacefully in his sleep in the early hours of this morning, Wednesday 14th May.'

After finding out his cancer was incurable in December 2012, Stephen dedicated his remaining days to spreading positivity.

He made it his mission to make others happy, encouraging everyone he encountered to live their lives to the fullest.

Speaking in his Fixers broadcast story last November, Stephen said: ‘My cancer was a huge kick up the backside and made me realise that I might as well do something with my life.

It was this philosophy that prompted Stephen to plan a Good Gestures Day with Fixers in 2013.

Held in Birmingham, he recruited a team of young people to join him in handing out free hugs, high-fives, handshakes and fist bumps, with the sole aim of making others smile.

The success of the first event led Stephen to enlist the help of his friends and together they began to plan the bigger National Good Gestures Day that took place in ten towns and cities last Saturday 10th May.

When his health deteriorated in April and he gave what he thought would be his ‘final thumbs up’ from his hospital bed, he instructed Fixers to ensure the event went ahead, with or without his involvement.

A ‘remarkable’ but temporary improvement in Stephen’s condition meant he was able to attend, continuing to spread good cheer in his final days.

Watch the film below to see what happened.

An inspiration to other young people, Stephen’s positive attitude also prompted his friend Hannah Telles to organise an event with Fixers to encourage people to laugh on World Laughter Day.

It was here that hundreds turned out to set the Guinness World Record for the largest gathering of people making heart-shaped hand gestures, helping Stephen tick another item off his bucket list.

As a part of his legacy, Stephen hoped for National Good Gestures day to become an annual event, and for his campaign to continue to inspire others to spread happiness.

‘I want people to remember me as a fun, caring teenager,’ he said.

‘As just an average guy who wanted to make a little bit of a difference to the world.’