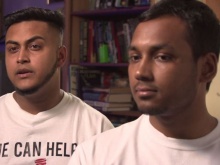 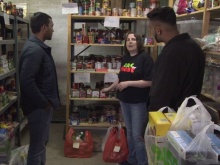 The Fixers visit a food bank 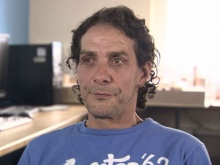 Larbi Oulad-Issa shares his experiences in the film

When he moved to London from Bangladesh, Shah Rahman was shocked to find people in the city going hungry – now, with fellow Fixer Asad Khan, he wants to help tackle food poverty.

Their story was shown on ITV News London on Thursday 8th May.

Shah (24) and Asad (23) from East London want their campaign to reach people who don’t have enough to eat and don’t know where to go for help.

‘Our Fixers project is about tackling food poverty in Tower Hamlets, which is one of the poorest boroughs in the UK,’ says Shah.

Asad adds: ‘We particularly want to target people from black and minority ethnic backgrounds that may face cultural and language barriers.’

In the broadcast piece the Fixers meet Larbi Oulad-Issa, who tells them he has lived in the UK for thirty years and has worked as a chef.

‘I have been without benefits for two months and I don’t know how I can put food on the table,’ he says.

‘I’ve started to sell my stuff – my fridge, my washing machine and some clothes.

‘If you are hungry, it’s very, very bad. It’s like somebody putting a gun to your head.’

Shah and Asad are planning to open a food bank later this year, to provide supplies for those who struggle to afford to eat.

They’ve recruited a team of volunteers to help them spread word of their food bank in the community.

With Fixers, they’ve created t-shirts for the volunteers and are producing a film to show both the extent of the problem and the help available.

Professor Martin Caraher, from City University London, also appears in the broadcast piece in support of Shah and Asad’s campaign.

‘That roughly equates to about 100,000 people in London that are dependent on food banks every week.’

Asad added: 'Where we live, Canary Wharf is just across the road, yet we’ve still got this issue of food poverty.

‘We don’t want anyone to go hungry, no matter what their circumstances are.’