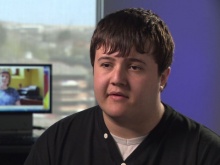 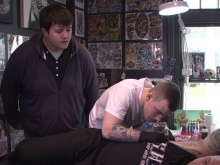 Cameron visits a tattoo parlour in the broadcast 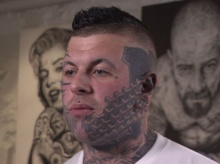 Knowing that body modifications like tattoos and piercings divide public opinion, Cameron Bash is urging employers not to judge job candidates on the way they look.

His story was shown on ITV News Cymru Wales on Thursday 8th May.

The 17-year-old from Merthyr Tydfil is challenging negative perceptions of body art after he was told to remove a piercing for a job.

‘I was with an agency that helps people into work and around that time I got a lip ring,’ Cameron explains.

‘I went for an interview and was told if I wanted this job then I had to take it out.

‘It made me feel bad and really down about myself.’

With Fixers, and the rest of his team, Cameron has helped create a film featuring two girls, who are similar, aside from the fact that one has tattoos and a piercing.

It aims to show that body modification has no effect on an individual’s personality, demeanour, or ability to work.

Kiera Tsenti, an employment consultant, appears in the broadcast piece in support of Cameron’s campaign.

‘I would say to any young person going for a job with tattoos and piercings that any environment they go into may be different,’ she says.

‘A corporate employer may see it as an act of rebellion but in other places it wouldn’t matter.

‘Sometimes expressing yourself is actually encouraged.’

He believes that attitudes towards tattoos and piercings in the workplace are softening.

‘I would say there is still prejudice among employers, but it is changing,’ Keif explains.

‘I was in a shop the other day and the girl who served me had tattoos - a year ago I don’t think you would have seen that.’

Cameron adds: ‘I would be happy if members of the public and employers saw this piece and realised that it’s not what is on people’s skin or what is in their face that’s important.

'It's what is on the inside that makes them who they are as a person.'

Cameron isn’t the only Fixer to warn against judging people on appearances.
A group from Newport show there’s more to life than looks.