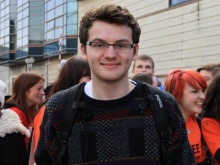 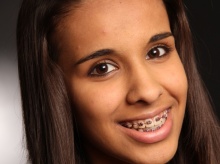 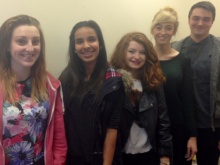 Friends of Stephen Sutton in his home town in Staffordshire are hoping to get enough people together making heart-shaped hand gestures to secure him a place in the Guinness World Records book.

Hannah Telles from Burntwood will lead a group trying to set the record in his honour – helping him to tick another item off his bucket list.

Nineteen-year-old Stephen, who has incurable cancer, had been involved in organising the attempt before his health deteriorated and he was admitted to hospital.

It will go ahead in the presence of an adjudicator after Stephen listed ‘getting my name into the Guinness World Records book’ as one of the things he wants to accomplish in his lifetime.

‘Hopefully we will achieve a new world record for Stephen,’ says 17-year-old Hannah.

‘We chose the heart-shaped hand gesture because it fits with Stephen’s positivity.

‘We all love Stephen and we want to share that love.’

At least five hundred people will need to gather and make the hand signal for a new world record to be set.

Hannah hopes this will happen at Stephen’s old school, Chase Terrace Technology College in Burntwood, on Sunday 4th May.

Anyone wanting to participate is being asked to meet in the sports hall at 3pm.

Planned to coincide with World Laughter Day, also on the 4th, a laughter yoga therapy session will follow the record attempt, in a bid to further spread Stephen’s positivity.

‘Laughter yoga therapy is where you use certain techniques to laugh. It becomes infectious and the person next to you laughs,’ Hannah adds.

‘It’s been proven that laughter is good for you – it has a lot of health benefits.

‘Stephen did a Fix a few months ago, a Good Gestures Day, and it inspired me to try to help more young people.

‘My project is to encourage them to empower themselves, to have fun, and to laugh.’

For more information about the event and how you can get involved, contact Fixers Young People’s Coordinator, Nithee Kotecha, by emailing nithee@fixers.org.uk.

10th of May is Good Gestures Day!
Find out more about other upcoming events inspired by Stephen Sutton.