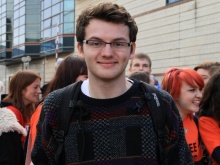 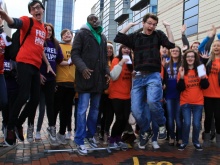 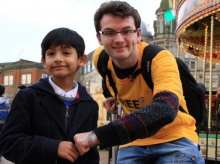 After a three-and-a-half year battle with cancer, inspirational teenager Stephen Sutton is, in his words, ‘still here and still fighting’ - with his friends vowing to continue his Fixers campaign.

The 19-year-old, who was diagnosed with bowel cancer when he was 15, was admitted to hospital over the weekend with a collapsed lung caused by his tumours.

Communicating with more than 250,000 well-wishers via social media, Stephen wrote on Tuesday that he thought the latest deterioration in his health was ‘just one hurdle too far.’

But, on Thursday, he was able to update supporters with the positive news that his progress since then has been ‘good but steady.’

Since learning his illness was incurable in December 2012, the teenager from Burntwood in Staffordshire has touched the lives of many with his continued positivity.

With Fixers, he hosted a Good Gestures Day in Birmingham last November.

Recruiting a team of young people to join him, he doled out hugs, handshakes, fist bumps and high-fives, to raise the spirits of those passing through Victoria Square.

The resulting National Good Gestures Day is due to take place on Saturday 10th May.

Building upon what Stephen started, many of his supporters have volunteered to get groups together to spread happiness in their communities through simple acts of kindness.

Events are being finalised in areas as far-reaching as Manchester, Falmouth, London, Swansea and Glasgow. Click here for details of all confirmed locations.

Nineteen-year-old Alex Hunter went to high school with Stephen and will rally support for the gathering on London’s South Bank.

‘Stephen is an inspiration,’ he says.

‘By taking part in this event I am helping Stephen in his efforts to bring some happiness to random members of the public.

Sadie Fox, 18, will lead the team in Liverpool. She adds: ‘Stephen’s message is amazing.

‘Hopefully it will live on for years to come.’

The events next month will go-ahead under Stephen’s instruction to make them as successful as possible.

It’s hoped they will contribute to the brave teen’s lasting legacy.