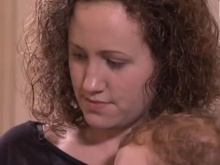 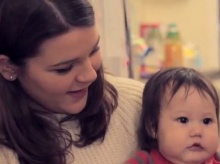 A shot from the Fixers film 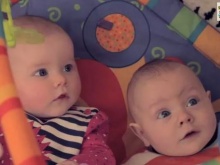 Babies featured in the Fixers film

Feeling strongly about the benefits of breastfeeding, Kim Wilmshurst has enlisted the help of other mums and their babies to show women the alternative to formula milk.

The 23-year-old from Harrow in London is urging young mothers not to dismiss the natural feeding method in favour of bottle feeding too quickly.

‘When my son was born I felt that human milk was the only nutrition I wanted my baby to have,’ explains Kim.

‘There are always cultural changes that affect how mothers choose to feed their infants.

‘I believe that the prominence of advertising and the sexualisation of breasts in our country means that more women are turning to infant formula.’

With the support of other women, Kim learned to breastfeed after some initial struggles, and hopes her campaign will show others that it’s worth persevering.

‘What I didn’t know was how difficult I would find breastfeeding and how little I would enjoy it in those early days.

‘If it was not for the help of amazing women in my community I certainly would not have been able to nurse my son at all.

With Fixers, Kim has created a film to promote breastfeeding that imitates TV adverts for formula milk.

Shot at The Nest baby lounge in Harrow, it stars a number of young mums and their babies and highlights the health benefits breastfeeding can offer both mothers and infants.

‘I want to show the advert online via social media to reach as many pregnant women as possible.

‘It’s aimed at everyone because infant feeding choices are an important decision for any mother regardless of age or background.

‘I hope that my Fixers project will be one more step in helping to normalise and encourage breastfeeding because, for me, choosing to breastfeed my son was the best decision I’ve ever made.’

Find out more about Kim’s Fix.

Watch her broadcast story which was shown on ITV News London.