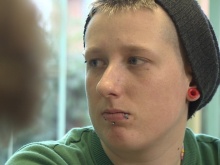 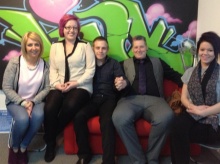 At the drop-in centre 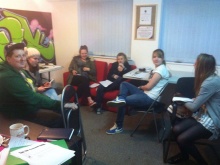 Songwriting session at the centre

Determined to help others on their estate make a better life for themselves, Jayden Neville-Moore and his team from Taunton have turned their dream of a drop-in centre for 16 to 25-year-olds into a reality.

The group have officially launched the facility, following more than a year-long campaign led by 23-year-old Jayden.

It will provide those living on the Halcon estate, which is among the top 5% most deprived areas in the country, with somewhere to gather, socialise and learn new skills.

It’s hoped that running training sessions at the centre will help young people in the area boost their CVs and improve their job prospects.

‘I think it will make a real difference,’ says Jayden.

‘It will give young people somewhere to go, rather than being on the streets.

‘It will also provide them with the support and advice they need to better themselves and move forward.

‘We’re going to ask those who come along which skills they’d like to learn and then decide what to offer from there.’

Jayden and his team began their campaign in 2012 and created a film, with Fixers, to demonstrate the need for a youth centre in their area. Watch it here.

It was shown to Taunton Deane Borough Council, who awarded the group a grant for their project.

As a result, the drop-in centre, branded ‘YAP’ or ‘The Young Adults Project’, launched at the Link Centre on Monday 24th March and will continue to open on Monday and Wednesday evenings between 6:30 and 8:30pm.

‘So far we’ve had ten young adults attend,’ explains Jayden, who’s been helped at the sessions by volunteers Megan Wilkinson and Shane Nelson.

‘Last Monday night we really hit it off.  We held a songwriting session – everyone loved it and left wanting to come back.’

If the sessions continue to be a success, the group hope to extend opening hours to cover extra nights of the week. They’re also hoping to get funding to run a residential trip.

‘Getting this far has been hard work, but it’s definitely been worth it.

‘When you’ve been volunteering and living on an estate as long as I have, it’s great to be listened to and have someone take you seriously.

‘I’m really pleased to get this off the ground.’

Find out how rural Fermanagh Fixers are campaigning
to make their town more youth-friendly.