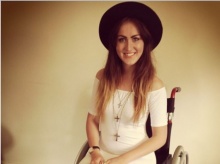 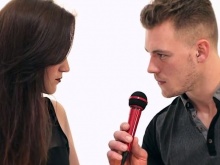 Chelsey appears in the film with Fixer Jack Eyers 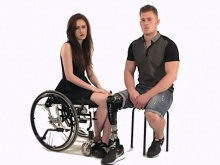 Concerned that people with disabilities are under-represented in the media, a 23-year-old model from Essex wants to show the film, music and fashion industries what they’re missing.

It affects the way blood flows around her body, meaning she’s unable to stand up without fainting and has to use a wheelchair.

‘I felt isolated and I didn’t feel represented. I had gone from seeing other able-bodied people like myself everywhere in the media, to not seeing anyone like me.

‘It makes you feel like being disabled makes you some sort of monster.’

Chelsey has created a short film with the help of Fixers to remind viewers that disabled talent should be embraced, not excluded.

She appears in the piece alongside Fixer Jack Eyers, to call for better representation of people with disabilities in the media.

The pair would also like to see fewer disabled characters played by non-disabled actors.

It’s not until the end of the film that Chelsey’s wheelchair and Jack’s prosthetic leg are revealed.

‘I love the film,’ says Chelsey, who’s an ambassador for Models of Diversity.

‘I think the concept is brilliant. It shows that Jack and I are very capable – then bam! You see we’re disabled at the end.

‘I want others to accept that people like me and Jack are the next generation of models.

‘We are not all the same and perfect - we are a real and true reflection of people.’

With Fixers, Chelsey has visited her old school, Maltings Academy, to speak to sixth form students about her campaign.

She now wants as many people as possible to see her film.

‘I’d like young people to see it to overcome any ignorant views that have been passed on to them,' she adds.

‘So far, I haven’t come across anyone who doesn’t want to see this change happen.

‘That, in itself, speaks volumes.’

Showcasing the talents of people with disabilities also tops the bill
for Fixer Chandos Green. Click here to watch his TV story.

Find out more about POTS.