Baking on a Budget 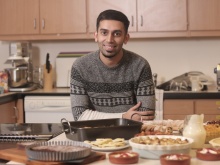 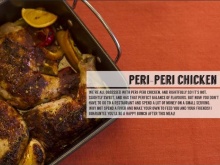 An image from the Fixers recipe pack 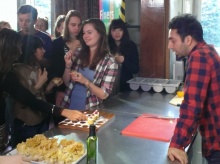 After appearing on TV screens as a contestant on The Great British Bake Off, Ali Imdad is teaming up with Fixers to try to start a student food revolution.

The 26-year-old* from Birmingham is concerned that too many young people at university live off unhealthy tinned food and takeaways, thinking it’s saving them money.

‘Anyone can do it and it can be cost effective.’

With Fixers, Ali has created ‘Bake Five: A Guide to Baking For Under £5’.

It’s a series of recipe cards providing step-by-step instructions on how to make dishes including macaroni cheese, peri-peri chicken and cookie dough.

‘I think the resource is great!' says Ali.

'I took a long time to consider which recipes to include. I wanted them to be simple and to offer vegetarian options as well as meat, and both sweet and savoury.

‘They contain all sorts of nutritious ingredients and they only require basic equipment.’

Click on the image below to view Ali's recipe pack.

Ali launched his recipe packs on Thursday 27th March at the University of Birmingham.

As well as watching his cookery demonstrations, those attending the event were able to taste the dishes.

He now plans to send the packs to universities so they can be distributed to young people living away from home and on a budget.

‘At university I found students would spend on books and nights out,’ he adds.

‘But, if you can also put aside a bit of money for food, you can really enjoy making it.

‘If those who would not normally bake were to try a couple of my recipes, then I would consider my project a success.’

To see more about Ali on The Great British Bake Off, click here.