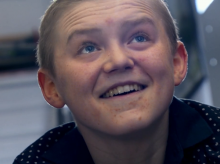 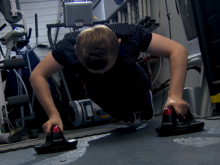 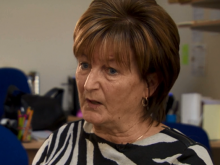 A 17-year-old County Antrim Fixer is using his experiences with anorexia, which went as far as calorie-counting toothpaste, to encourage others to overcome the condition.

Watch his story, which was broadcast on UTV Live in April, above.

Jordan Caldwell from Carnmoney was diagnosed with the eating disorder at the age of 12.

Unable to cope with the heartache of losing close family members and being cut from his local football team, he started compulsively exercising and skipping meals.

Now in recovery, the Fixer is sharing his story to inspire others with eating disorders not to lose hope.

‘I felt very low and confused,’ Jordan explains. ‘I was doing sneaky exercise; sit ups, press ups, anything I could.

‘Refusing to eat or drink anything, I didn’t even brush my teeth because I thought there were calories in the toothpaste.

‘The anorexia was like someone else was in control of my body.

‘Now I want to show others that they can recover.  There is always a bright side if you’re willing to fight.’

In the broadcast item, Jordan meets with personal trainer Ben Mudge, who’s been helping him through his recovery.

‘Jordan’s journey has been incredible,’ says Ben. ‘To see from where we started six months ago to where he is now is fantastic.’

‘Calls from men have increased and the other big difference is that they are becoming younger,’ she says.

‘If it is missed in those early days, it can become all encompassing.

‘We need young people like Jordan to say - “I’ve had an eating disorder but have been able to conquer it" - and give young people hope.’

Jordan adds: ‘I want people out there that are struggling and feeling really low to realise that they can start to enjoy life again, realise that it is too short and worth fighting for.’

See how Fixer Stacey Patience is using her website
to raise awareness about eating disorders.