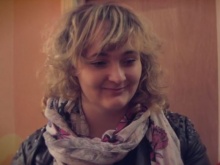 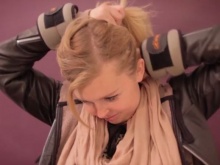 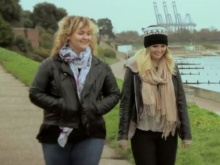 Fixers Ashleigh and Abbie in the film

Two years after she was diagnosed with ME, a Fixer from Essex is helping others to understand the condition that can leave her bed-bound.

Seventeen-year-old Ashleigh Lovett, who lives in Harwich, is concerned that ME, also known as chronic fatigue syndrome, is often mistaken for laziness.

With Fixers, she’s created a film to shatter that myth and reveal the challenges faced by those living with the symptoms which include extreme physical and mental tiredness.

‘I wanted to raise awareness of the condition to better inform people about what it actually is,’ says Ashleigh.

‘By doing this I hope to help those with ME, as people around them will be able to understand.

‘Before I was diagnosed, I had no clue what it was.’

In her film Ashleigh enlists the help of fellow Fixer, Abbie Elwood, to demonstrate how it feels to have ME.

Abbie wears weights on her arms and legs to simulate the feeling of heavy limbs before being challenged to complete everyday tasks like shopping and getting ready.

She admits finding the activities a struggle.

‘I hadn’t really heard of ME before,’ Abbie says.

‘I would've assumed it was just being tired now and again.

‘Once I put the weights on and started to do what Ashleigh would do day-to-day, it really started to show how hard it is for her to do the simplest things.’

Ashleigh, whose story was featured on ITV News Anglia in October 2013, hopes to show her film to school pupils.

‘I plan to share it with local schools, as one of the main causes of absence at school is ME,’ she adds.

‘I would also like to promote it on social media so it can reach a wide range of people.

‘I think my Fixers film is amazing and really gets the message across.

‘I hope that people will learn to recognise ME and will understand what a sufferer is feeling so they know how they can help.’

You can watch the film ‘M.E. and Me’ at the top of this page.

For more information and help visit the NHS, ME Association and the Association of Young People with ME websites.