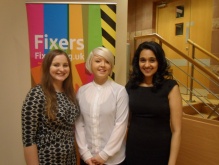 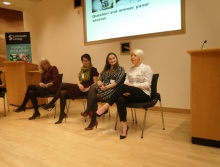 Q&A session at the event 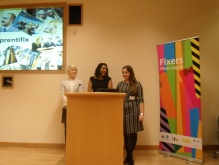 The Fixers speak at the screening

A group of Fixers from Worcester, who feel more people should appreciate the benefits of apprenticeships, have received positive support for their project.

The evening, organised by the trio and supported by Sanctuary Group, was attended by an audience of representatives from local companies, schools and youth organisations.

With the help of Fixers, the group produced a film that tells the stories of three young adults who successfully completed apprenticeships in business and administration, hairdressing and the tattoo industry.

‘We are really pleased with the feedback that both the event and the film received,’ explains Fixer Meera.

‘The most positive outcome was that it got people talking.

'It helped people realise the wealth of opportunities in our county.’

The screening event included a question and answer session with fellow Fixers Jade and Beth, who have both completed apprenticeships, as well as Sarah Morris from the National Apprenticeship Service and Emma Bennett from the Hereford and Worcestershire Group Training Association.

Guests were also invited to take part in a quiz and were played a recorded message from Robin Walker, MP for Worcester, who supports the Fixers' campaign.

Among the attendees impressed by the project was Amanda Walford, HR manager at St Richard's Hospice, who congratulated the Fixers on their achievement.

‘I thought it was really good and it definitely got the message across,’ Amanda says.

‘It was great to see the different types of apprentices. It was really informative.’

Fixer Jade added: ‘Tonight has been great. It’s so good to get involved in something that you’re passionate about.

‘I really hope everyone here enjoyed tonight and the film.’

You can watch the film ‘Apprentifix’ at the top of this page.

About Meera, Jade and Beth