Let’s Tackle It Fix On ITV 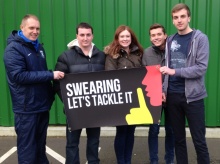 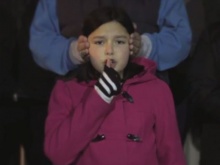 A young girl quiets the crowd in the Fixers film 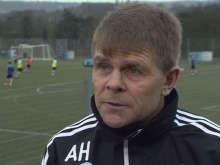 Two football referees from Kent are among a group of Fixers who want to tackle the issue of swearing on the pitch.

Their story was broadcast on ITV News Meridian (E) on Thursday 6th February.

Twenty-three-year-old Ricky Adams and Jess French (18) are sick of the foul and abusive language used by some players and supporters, which they think has no place in the sport.

‘Since I’ve been refereeing men’s football I’ve gradually learned that swearing is a lot more common than in youth football,’ says Jess.

‘Being a young female, it seems to be that I get a lot more abuse from the fans and the crowd.

‘The top professionals seem to be able to do it on the TV cameras and nothing is done.

‘Players see it happening on a Saturday on Match of the Day so think why can’t they do it on a Sunday morning?’

Along with fellow members of the Kent FA Youth Council, Ricky and Jess have helped create a film to make the point that using offensive language on the pitch is unacceptable.

It shows the aftermath of a bad tackle, when both a player and the fans are verbally abusing the referee.

The focus then shifts to a young girl in the stands who raises her finger to her mouth and instructs those around her to ‘shush.’

In the broadcast piece the Fixers show the film to Andy Hessenthaler, former Director of Football at Gillingham FC.

‘It’s a fantastic video,’ he says.

‘If you can see players behaving like that, when they are supposed to be role models for the youngsters, I think it could drive people away.

‘It could certainly drive parents away from the game and that won’t help football.’

Jess adds: ‘I’d be happy if I could go down and watch a game of football and actually enjoy it.

‘I don’t want to worry that people are swearing at the referee.’

You can see the film ‘Swearing – Tackle It’ below.