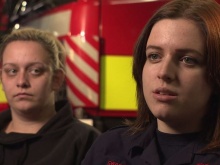 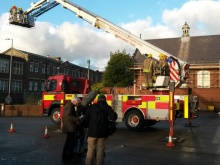 The Fixers broadcast crew film at the fire station 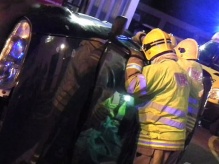 A scene from the broadcast film

A team of Fixers from Wrexham are highlighting the hard work firefighters do in the aftermath of car crashes.

They hope it will encourage young people to think twice about the actions they take behind the wheel.

Their story was broadcast on ITV News Cymru Wales on Thursday 6th February.

Laura Kendrick (21) and Jasmyn Humphreys (19) aren’t convinced all young drivers exercise caution on the roads or give consideration to the role firefighters play following a collision.

‘Young drivers can go out and be careless,’ says Jasmyn.

‘If they crash and they’re pulled out of the car, they might not actually think about who got them out and how much work it took to do it.’

‘We want the film to be from a firefighter’s point of view,’ Jasmyn explains.

‘We want to show what the firefighters are actually doing – so people can think “hang on a second – I didn’t realise they go to these extremes when there’s a road accident.”’

Laura adds: ‘The message is to think about what you’re doing before you do it.  For example, when you are in a car, turn your phone off and put your seat belt on.’

The two Fixers first met during a course run as part of the North Wales Fire and Rescue Service's Phoenix Project and will pass on some of the information they have learned from the programme in their Fixers film.

The Fixers hope that other young people take note of their message and give more careful consideration to road safety and the valuable work done by firefighters.

Laura adds: ‘We just want everyone to be safe. Everyone deserves to live their lives – we want them to live as safely as they can.’