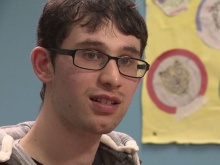 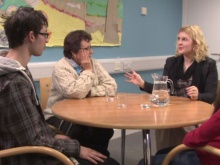 Ben meets others with dyspraxia 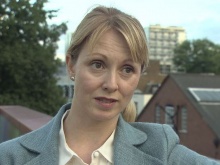 A Cambridge Fixer, whose dyspraxia causes him to find activities like shopping and riding a bike difficult, wants to bring others with the condition together.

His story was broadcast on ITV News Anglia on Thursday 6th February.

Twenty-three-year-old Ben Wearn was diagnosed with dyspraxia when he was four and says he finds it isolating.

With the help of Fixers, he’s setting up and promoting a support group so people with the disorder can share their experiences.

‘It’s useful to meet up with people my age who struggle with similar things and try and find coping mechanisms.’

In the broadcast piece Ben chooses a logo for his group, designed by the Fixers team, and meets other people with dyspraxia.

‘Dyspraxia is a complex neurological condition. It’s present from birth,’ she says.

‘Children are often late in reaching their developmental milestones such as crawling, walking and learning to talk.

Ben adds: ‘Trying to cross roads is a lot harder for people with dyspraxia.

‘The speed of the car and the judgement of how far away it is, is difficult to interpret.

‘Shopping is another big issue - knowing what to buy and how much change to get.

‘And learning to ride a bicycle was difficult. I want to push both my feet down on the pedals at the same time.’

As his project progresses, Ben hopes to meet other young people who have been diagnosed with dyspraxia and find ways for them to help each other.

‘I think it’s a very positive thing to do,’ he adds.

‘I feel very proud of myself.’