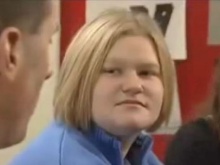 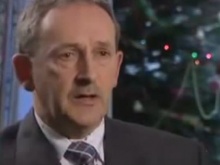 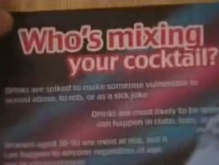 A flyer distributed in clubs and pubs by the group

A Fixer from Devon is warning young people about drink spiking - a problem which she feels is growing in her community.

Her story was broadcast on ITV News West Country in December 2008.

Twenty-year-old Hayley Glover and her group of Fixers, all from YWCA Plymouth, feel it is imperative that young people know how to recognise and prevent drink spiking.

‘A friend of mine thought she was going to die,’ says Hayley.

‘She was in a club having a drink with family and friends, and the next minute she was on the floor.

‘I think it’s a very big problem and it’s dangerous. It’s so important that people look after their drinks.’

With the help of Fixers, Hayley and her team have created posters and a short film to be shown in popular pubs and clubs, in the hope of raising awareness of how often drink spiking occurs.

‘I think there is a general under-reporting through either embarrassment, or due to the fact that the victim physically cannot remember, because the drug that’s been used is something that can cause memory loss.’

According to the NHS, two of the most common reasons for drink spiking are to allow an offender to commit a theft or a sexual assault.

‘I’m very happy to be able to take part in this campaign, helping the community and other people realise what goes on,’ explains fellow Fixer Jade Ives.

‘I want to help people understand that it may not happen to them, but it may happen to others who they can help.’

You can watch the group's Fixers film below.