Give Up The Gang 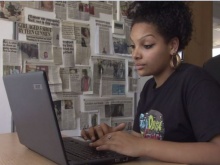 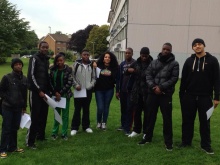 The cast of 'The Struggle' 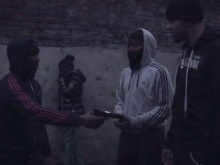 After London’s gang culture led to the death of one of her childhood friends, a Fixer has launched a film to shed light on the reasons why people get caught up in gangs.

Eighteen-year-old Temi Mwale, who grew up on one of the biggest council estates in Barnet, wants to challenge the misconception that it’s a particular type of person that gets drawn into gang life.

She screened her Fixers film ‘The Struggle’ on Thursday 23rd January at The artsdepot in North London.

‘Mixing them all together, under one roof, is very difficult to achieve.

‘At the same time, it’s important to do that, as these sorts of audiences shouldn’t be seen as separate.

‘It’s about collaboration and more people need to start working together as it's a vital part of the healing process.’

Temi’s Fixers film tells the story of two young men who get mixed up in gang life, despite their reluctance to do so.

Their paths cross and it results in tragedy, with the film showing how different the ending could have been for both of them.

You can watch Temi's Fixers film ‘The Struggle’ at the top of this page.

By raising awareness of the reasons for joining a gang, it’s hoped more young people can be prevented from taking that route.

‘I would like this film to be shown in schools in the future,’ Temi adds.

‘With regards to gang-related issues, the severity is still being underrated and overlooked.

‘To this day, even with publicity in the media, people don’t really understand the root of the problem.’