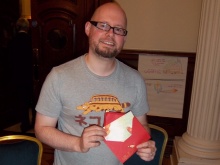 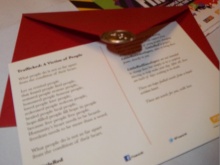 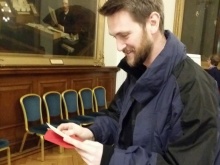 A mystery poet’s novel idea to send heart-warming pick-me-ups in the post has had its official launch in Belfast.

The Fixers campaign involves surprising members of the public with anonymous letters filled with poetry to help brighten someone’s day.

The project was unveiled at Belfast City Hall on Tuesday 21st January to an audience of 40 guests, who were delighted to be the first recipients.

‘Getting an envelope was a real highlight,’ said Patrick Sanders, an attendee at the event.

‘I’ll be putting this up somewhere prominently at home so I can continually be encouraged by it.

‘The poems are beautiful, artwork fantastic and presentation very tasteful. And it’s all done with love.'

‘It is a great project concept and really well done.’

The poetry is written by contemporary poets and will be sent to various addresses under the pseudonym ‘Little Red’.

There will be 300 letters delivered across Northern Ireland, some of which have already been posted.

Fixers Young People’s Coordinator, Chris Pollock, was at the launch to talk about the benefits of such a unique project.

‘It’s really encouraging to know that young people like this are doing something to make people feel slightly better about themselves,’ he said.

‘I’m sure there are countless people from communities who’ve had a tough time lately, so random acts of kindness provide a much needed boost for many.’

If you think somebody deserves an envelope from ‘Little Red’, you can leave a message on Twitter @handwrittenred.