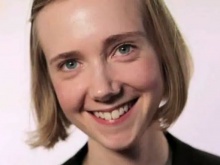 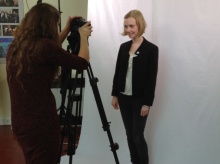 Jessica has her photo taken for her booklet 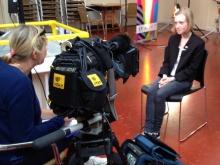 A Fixer from Slough, who was diagnosed with dyspraxia twelve years ago, has created a guide to help others with the disorder set up support groups.

Twenty-three-year-old Jessica Starns began her project after becoming concerned about the lack of information available to 16 to 25-year-olds with the condition.

Her story was featured on ITV News London in November 2013.

Jessica's Fixers booklet explains what dyspraxia is, includes personal stories from those with the disorder and offers advice on how to establish a support network.

‘I’d like young people to set up their own groups in their own areas,’ she says.

‘They will get to know other people with dyspraxia and will be able to provide peer support.’

Dyspraxia is a condition that affects movement and co-ordination and can have an impact on a person’s ability to complete day-to-day tasks including writing, cooking and planning journeys.

‘I wanted to raise awareness of dyspraxia because not many people know about it,’ Jessica adds.

‘I have dyspraxia and I still find that no-one really speaks about it.’

Read Jessica’s ‘Dyspraxia and You’ booklet below.

As well as sending her booklet to organisations including the Dyspraxia Foundation and Dyspraxia UK, it will also be distributed at a series of workshops that Jessica is planning to accompany her resource.

The sessions for dyspraxics will focus on topics including interview preparation, cooking, keeping fit and managing finances.

Jessica hopes they will greatly benefit those who attend.

‘They can learn new skills and talk to each other,’ she says.

‘There isn’t anything out there like it at the moment.’

If you like this Fix, see how Fixer Ben Wearn is educating others about dyspraxia.