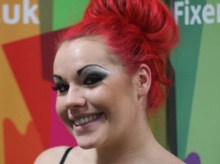 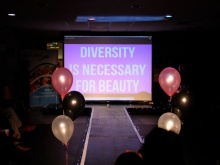 The Fixers film is screened 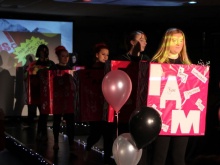 The Fixers hold a fashion show

A group of Fixers from South Wales are encouraging young people to accept that there’s no such thing as perfect when it comes to physical appearances.

Led by 19-year-old Jessica Newman from Caerphilly, the team are concerned that young people feel pressure to look a certain way which can lead to low self-esteem, low confidence and depression.

With the help of Fixers they’ve created a film and held a fashion show to promote the positive message that beauty comes from within.

‘Confidence is an issue I care about because it reflects how you feel about yourself and others pick up on this,’ says Jessica.

‘I am confident, although I’m the total opposite without my make-up – that’s when I find it difficult to make eye contact.

‘I think it’s a personal thing. It’s not about trying to look glamorous constantly. It’s about feeling comfortable with yourself.’

The Fixers took part in a fashion show and screened their film at Bron Afon Community Housing in Cwmbran on 3rd December.

Around 100 people attended including young people and youth workers from Newport Youth Service, other Fixers and their families and representatives from Bron Afon and Charter Housing Associations.

The team opted to walk down the catwalk in plain outfits and cardboard boxes rather than fashionable clothes.

On the boxes were words describing each individual’s personality, dreams and aspirations, aiming to show that there’s more to a person than the way they look.

During the event their Fixers film was projected on to a screen.

The film is composed of close-up photographs showing a series of faces.

Each image is split into three horizontal layers and as the film plays out the layers move interchangeably, showing different combinations of eyes, noses and mouths.

The idea is that it highlights the importance of individuality.

‘I thought the finished film was fab and it was really effective at the event,’ adds Jessica.

‘The event went really well and all the feedback I’ve received so far has been positive.

‘I may show the video to other young people in the future to get across the point that everyone is beautiful and you don’t always have to hide behind a mask.’

You can watch Jessica and her team’s Fixers film ‘No Such Thing as Perfect’ at the top of this page.