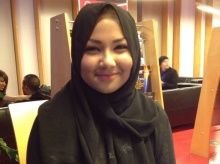 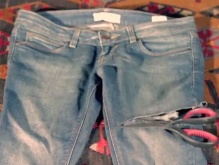 A pair of jeans get the chop in the Fixers film 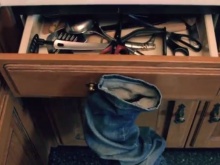 A resourceful Fixer from London is encouraging young people to breathe new life into their old clothes.

Nineteen-year-old Rema Rohim has helped create a film to prevent people unnecessarily throwing away items they no longer wear.

‘I wanted to do this project because I realised I had so many things that were being wasted and not enjoyed hidden in my closet,’ says Rema.

‘It’s something I’ve experienced and I know many others have too – people like me who don’t want to turn to companies like eBay to flog their things.

‘I felt I had two options for old clothes – either throw them away or sell them and I didn’t like either of those options. It felt like a lose-lose situation.’

Rema’s film uses stop motion animation to make a pair of jeans appear to move on its own.

During the video the jeans are given a revamp and by the end have been altered to make denim shorts.

‘In my short film I wanted to show people what they could do with their old items,’ adds Rema.

‘I hope that my video will inspire people and demonstrate to them that it isn’t hard to make something old new again.’

The resource features the slogan ‘Old Is Gold’ and directs viewers to websites that offer ideas for reusing old clothes.

Rema hopes to screen her Fixers film to young people in the classroom to get them to think carefully about how to recycle clothes that have found their way to the back of the wardrobe.

‘I will be hosting an ‘Old is Gold’ event at a school so young teens can really get involved,’ she says.

‘I will run workshops to allow them to be creative and I’ll use my video as an introduction to the event.

‘I think the film is very realistic and I want people who watch it to be able to relate to it.’

You can watch Rema’s Fixers Film ‘Recycle and Revamp’ at the top of this page.