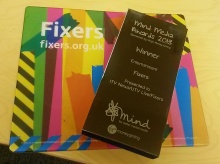 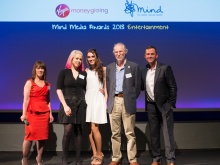 The Fixers on stage receiving their award 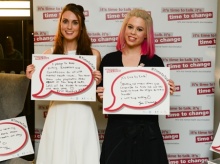 Fixers films about mental health have received national recognition after fending off fierce competition to win a Mind Media Award.

A collection of broadcast stories showing the work Fixers are doing to raise awareness of mental illness has been awarded the prestigious prize – beating a Channel 4 programme and a reality TV show about The Saturdays.

The films, which have been featured on ITV or UTV, were shortlisted in the Entertainment category at the Mind Media Awards.

The winning films were chosen because they increase understanding of mental health issues and were announced at a ceremony at the British Film Institute in London on Monday 18th November.

Fixers Jane O’Mahoney (23) and Erin Ruddick (22) from Newcastle attended the event, which was hosted by BBC Radio 1 DJ Scott Mills.

The pair, who have completed a project on the psychological aspects of eating disorders, were representing various groups of Fixers who have chosen to address issues surrounding mental health. 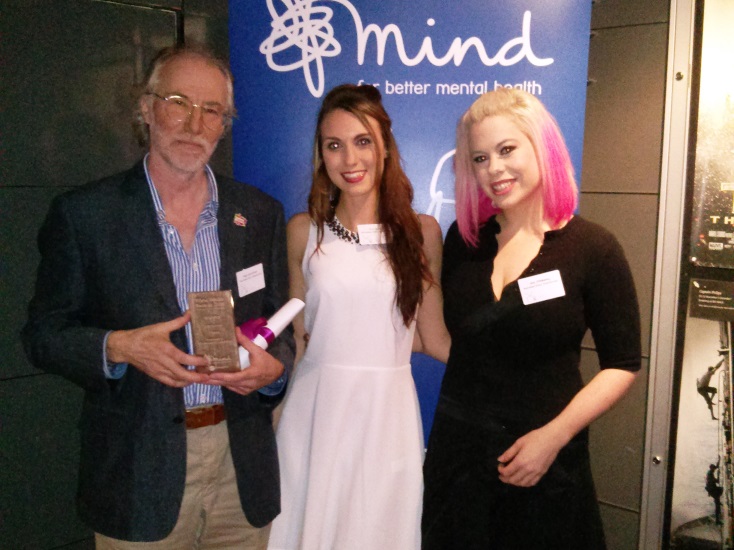 ‘I didn’t really expect it to be us because there were so many amazing stories,’ says Erin about the win.

‘It’s such a great feeling that something we’ve done has been recognised as positive. Speaking about mental illness can be seen as a shameful thing, so it’s good that it’s been acknowledged in this setting.

‘A man who had experience of bulimia came up and spoke to me afterwards. He was talking about how he wants to raise awareness, saying he’s found our work inspirational.’

Jane adds: ‘It was a really nice evening and the audience was lovely. Whenever anyone on stage was nervous the crowd cheered them on.

‘It’s brilliant to be part of a project like Fixers that’s doing such a good job at giving young people a voice. We’ve had the chance to break taboos and to show that mental health isn’t something to be ashamed of or to shy away from. It’s been a great opportunity.’

‘Erin and Jane accepted this award on behalf of Fixers all over the UK,’ explains Margo Horsley, Chief Executive of PSBT. ‘They are great role models for everyone. It’s all about real people, real stories, real life.’

Celebrating the success, Peter Ainsworth, Big Lottery Fund UK Chair, says: 'The Big Lottery Fund is very proud to be supporting Fixers to engage with more young people to change things for the better. Mental ill health affects a great number of people – young and old – so it’s wonderful to see that work to raise awareness of this issue across the UK is being recognised.'

Nine films were included in the Fixers entry. You can find out more about each of the Fixers and watch the broadcast stories by clicking on the links at the bottom of this page.

Each of the films has been broadcast on a regional news programme on either ITV or UTV.

Referring to Belfast Fixer Sean McAteer and his group's broadcast story about suicide awareness, UTV News Editor Chris Hagan says: 'Suicide in Northern Ireland is a big issue and these lads are doing a great thing. We’re so glad to be able to give these Fixers a voice.'

‘This award is fantastic recognition of the creative partnership between Fixers and ITV News,’ adds Alex Chandler, Editor at ITV London.

‘Each month ITV viewers get to see and hear about the issues that are affecting young people right on their doorsteps - none more important than mental health.

‘Congratulations to everyone involved but in particular to the young people who were willing to share their stories with us.’

Take a look at the nine Fixers films which together won a Mind Media Award:

Do you feel passionate about changing something for the better? Click here to find out how to become a Fixer.