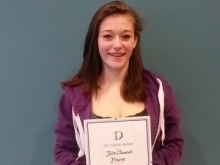 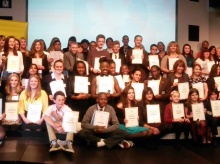 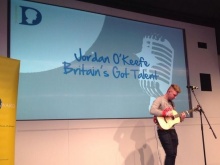 A Fixer from Poole, who's using her personal experience of cannabis addiction to warn other young people about the dangers of drugs, has been presented with a prestigious Diana Award at a ceremony in London.

Jade Clement was given the ‘Courageous Citizen’ accolade on Wednesday 16th October after turning her life around and helping others learn from her mistakes.

‘My campaign is not just about staying away from drugs, but also the dangers of addiction,' says 17-year-old Jade.

‘I have held workshops and created a video. I’m now planning a joint presentation with somebody whose campaign is about care, so we’re linking the two together.’

Find out more about Jade and her Fixers campaign by clicking here.

The Diana Award was founded as a legacy to the Princess of Wales and her belief that young people have the power to change the world for the better.

Jade was presented with her certificate at the ceremony in Canary Wharf by Paralympian Martine Wright, who lost her legs in the 2005 London bombings.

Jade was also asked to tell her story to the audience, being interviewed in the ‘Spotlight on Diana Award Holders’ section of the ceremony.

She was asked how she felt to win: ‘It feels amazing to be here getting my award.

‘It’s so nice to come out of the dark place I was in when I was using cannabis and put a brighter light on it now.’

During the ceremony, there were speeches from the Diana Award team and previous winners. Former Britain’s Got Talent contestant, and singer-songwriter, Jordan O’Keefe performed.

Three other Fixers projects were also recognised. Sophie Thorne (18), from Swindon, was named a Diana Anti-Bullying Champion for her campaign on cyber-bullying.

Laurie Foxcroft (18), from Plymouth, and her team, received a Diana Active Campaigner award for their Fixers film. It demonstrates the challenges faced by the children of serving forces personnel when a family member is deployed.

Kieran Hutchence (18), and his group from Harwich, were given the same accolade, for an event they organised to challenge the negative stereotypes attached to young people.

Could you follow in their footsteps and use your positive message to inspire others? Click here to find out how to become a Fixer.