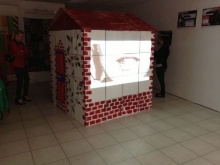 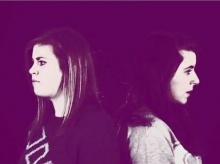 A scene from the Fixers film raising awareness of domestic abuse 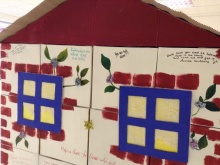 A group of Fixers from Wrexham are using their emotional Fixers film to raise awareness of domestic abuse.

The project has been described as ‘powerful’ and has been well received by audiences.

Based on real-life experiences, the film begins with actors telling the stories of women who have experienced violence, and ends with them relaying their messages of hope.

With the help of Fixers, the film was screened as part of a bigger project centred on an art installation. The group used cardboard boxes to build a model house with white walls, so their film could be projected on to the side.

It was exhibited in September at a Fixers ‘pop-up shop’ in Wrexham. Click here to listen to a BBC Radio Wales report on the event.

Speaking after seeing the film, one audience member, Abbey, said: ‘I found it inspirational as it showed women who live in the local area overcoming domestic violence.

‘It is an extremely delicate subject that has been approached well.’

Another audience member, Tasha, also watched the film and provided feedback: ‘I think the film was a real eye-opener. It shows people who may be suffering from abuse that there is a way out and there are places that offer help and advice.

‘The film also shows women who are suffering, that they are not alone.’

The exhibition was designed to be interactive, with visitors asked to write messages of encouragement, experience and kindness on the walls of the house.

Information about support agencies was provided, and links are also offered at the end of the film, as the Fixers hope their project will give women experiencing domestic abuse the confidence to seek help.

Lead Fixer, Sabrina Rafferty (16), says they wanted to show women who are experiencing domestic abuse that help is available.

‘There is a lack of knowledge about the support and help that’s out there for women in the Wrexham area,’ she says.

‘Through this project we hope to get people talking about domestic violence, and make victims – or people who know victims – aware of the support that is nearby.’

You can watch their Fixers film above.