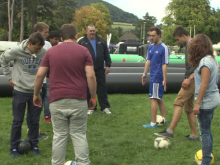 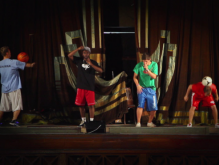 A scene from Ash's Fixers film 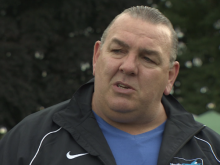 After discovering he had a hidden talent in football free styling, a Cardiff Fixer wants to inspire other young people to go in search of something they are good at.

His story was shown on ITV News Cymru Wales on Thursday 3rd October.

Fixer Ash Randall (24) realised he could do impressive tricks with a football when he was a teenager. He has since broken world records, joined the SBX entertainment team and appeared on TV shows watched by millions of people.

With the help of Fixers, he is creating a film to encourage others to nurture a talent they can be proud of, to keep them out of trouble.

‘The message I would like to get across to young people is try anything and everything,’ says Ash.

‘If you see someone else succeeding, you must not let it put you back by thinking they are better than you. You have to set yourself personal goals and say this is how good I can be.’

In the broadcast film, Ash takes his positive message to the Breakin’ Out Festival in Abergavenny, where he performs to the crowd and speaks to former international footballer Neville Southall.

‘I think a lot of young people give up because somebody somewhere doesn’t believe in them,’ says Neville.

‘For the people coming up, there are so many barriers now. We have to take all the barriers away.’

Speaking about his Fixers project, Ash says, ‘I believe everyone has a hidden talent. You just have to keep looking for it.'