Who Cares Fix on ITV News 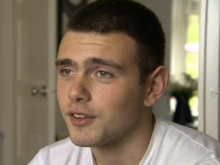 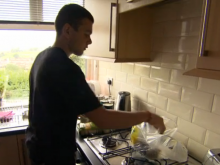 Jake helps out around the house 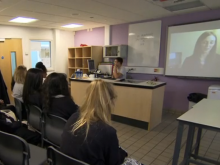 Jake's Fixers film is shown to a class

Fixer Jake Gibbins was a care-free, basketball-loving 12-year-old, but things changed when his mum was diagnosed with multiple sclerosis and he became a young carer.

The 17-year-old student from Leeds believes many like him easily slip under the radar and therefore wants to educate others on what it means to be child or teenager caring for a relative.

His story was broadcast on ITV News Calendar on Thursday 7th November.

Jake’s mum’s condition means that she has to rely on him enormously when it comes to day-to-day chores.

‘I had to become the man of the house overnight,’ says the teenager.

‘I felt like I had to balance the world on my shoulders. When there’s that much pressure, it can have physical implications. It’s obviously more than you can handle. These are the pressures that young carers can face.

‘I was really into my basketball and was going to go really far with it, but I had to give that up to look after my mum.’

School was also a struggle for Jake because he was often tired from getting up early and doing chores around the house.

It wasn’t until he was 15 that he opened up to a teacher, explained his situation, and received support from the local young carers group.

He has made a short film with Fixers, which has been shown to pupils at his old school, explaining why many young carers go unnoticed. He hopes it will inspire others, like him, to seek help.

‘The short film I made with Fixers is about my story and hopefully it will have a massive impact,' Jake says.

‘I just want to get across to people that there’s always hope for young carers, no matter how dark your situation may seem or how alone you may feel, there’s always someone there and you need to get support.'