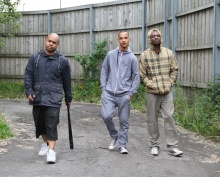 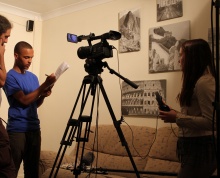 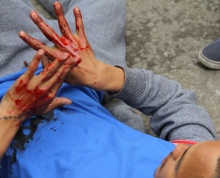 A scene from Mario's film

A former Manchester ‘bad lad’ has starred in a short Fixers film about his life - aiming to warn others about the dangers of being in a gang.

Mario Carroll, an ex-gang member from Droylsden, decided to turn his life around two years ago after narrowly escaping death during an ambush.

Now a reformed character, the 22-year-old has decided to make a film which he hopes will inspire school children to make the right choices.

‘I wanted to do something that would help others have a better life,’ explains Mario.

‘I know I made mistakes but now I’m using my experiences to stop other people from taking the wrong path.

‘The fact is, there’s only one outcome of being in a gang, and that’s dying young.’

Mario’s film, in which he plays himself, features a split narrative centred on what he calls a “trigger point” in his life.

It starts with the days when he was involved in gang culture and leads up to the critical point in his life when he was lying in a pool of his own blood outside his mum’s house after an attack. Mario says this was the moment he realised things had to change.

The film follows two different storylines: in one, he turns his back on crime and in the other, he chooses to seek revenge.

‘We didn’t just want to show one side of the story, because sometimes life isn’t pretty,’ says Mario.

‘I wanted to highlight the dangers of gang life and that it’s not really as glamorous as it looks.’

Now a father, Mario says it is difficult to re-live those memories, but insists it is the only way to get the message out there.

‘It wasn’t easy at all, because it’s a part of my life that is painful to re-live. But then again it’s made me the person I am today,’ he explains.

‘This is just the beginning. Hopefully a youngster will see the film and have a think about their life and where they want it to go. That’s the goal, anyway.’

You can view Mario’s film by clicking at the top of this story.