There's No Harm in Hope 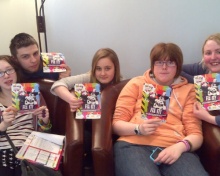 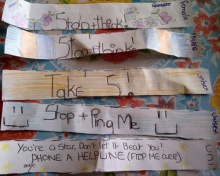 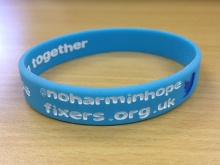 A Fixer from the Scottish Highlands is campaigning to break down the stigma associated with self-harm and to encourage those affected to seek help.

Diagnosed with mild autism last year and often bullied at school, Dingwall Fixer Katie McBeath (20) says she never had many friends to share her feelings with.

She started to self-harm as a way of dealing with her emotions, but soon realised she needed help to get better.

‘At my lowest I felt so isolated from the world and saw self-harming as the only answer,’ she says. ‘But I knew I needed help.

‘I've had friends that have had similar struggles and we often found that we were judged as time wasters and attention seekers.

‘I hope my project encourages folk to feel they can speak out and not delay their recovery.’

To promote her message ‘No Harm in Hope’, Fixers has helped Katie and her team create wristbands and set up a Twitter page where young people can openly discuss their troubles.

She hopes her campaign will promote solidarity between young people and be something that they can relate to.

‘My aim is to make young people understand there is a way out of strife and they shouldn’t be afraid to tell someone.

‘Creating a Twitter page where they can vent their feelings is ideal in encouraging them to seek help.

‘Though I have ups and downs, I’m in a much better place and want to reach out to other young people so they don't feel the same as I did.'

The wristbands will be distributed to mental health organisations around the Highlands, Islands and Moray.

Visit the group's Twitter page by clicking the link below.