Unity in the Community 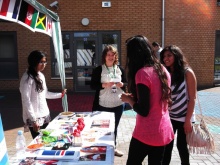 Fixer Rosina at the event 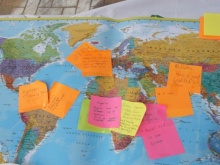 People add positive notes to a map of the world 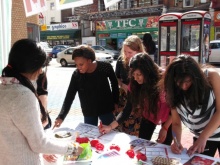 A Croydon Fixer has made it her mission to unite cultures from around the world, in a bid to boost community cohesion in the area.

Rosina Rahim, along with a group of other young people, created a workshop to bring everyone together at a local fun day at the CVA Centre on 7th September.

‘I think our project went well, even people walking past on the street became interested and took part in our event,’ says 18-year-old Rosina.

‘Many people tasted the food from different cultures that we had on display and then attempted the activities we had set up.’

Modupe Lucas who contributed to the event added, ‘The great thing about Croydon is the different cultures, and this is a great opportunity to celebrate, embrace and learn about them.’

MP Gavin Barwell attended to lend his support, and even took part in one of the activities.

On a map where people were asked to write what they like about their home country, he said, ‘What I like about the UK is its history, and the mix of people who live here.’

The young people were joined by Zain Afzal, another Fixer, who handed out his ‘Reject Neglect, Reduce Abuse’ wristbands.

Rosina looks forward to the impact she hopes their Fix will have on others, saying, 'We hope we have had a positive impact in raising awareness of the vast range of cultures we have in Croydon and that it will help make our community more cohesive.’