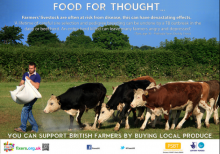 One of Lorna's campaign posters 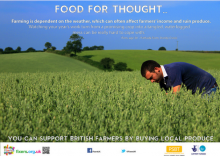 Lorna's partner poses for the posters 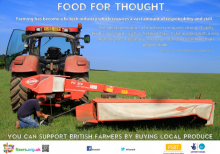 After being exposed to the harsh realities of farming, Fixer Lorna Keight (22) from Cornwall is using a series of posters to encourage the public to support their local farmers.

Seeing the day-to-day challenges her partner Tom Maddever faces as a farmer in Doddycross, Lorna decided to dedicate her Fixers campaign to raising awareness about the difficulties of working in agriculture.

‘I’m doing this project to raise awareness for farmers and to get the British public to support them,' says Lorna.

‘We’re hoping to put my Fixers posters in towns and cities across Devon and Cornwall.’

With research showing farmers are three times more likely to commit suicide because of the pressures, Lorna hopes her posters will show the public how important it is to support the British farming industry by purchasing local meat and produce.

‘I had no idea just how much hard work did go into farming. I think it’s really opened my eyes and shocked me and I just want to open the eyes of the British public as well.’

The Fixer is hoping to display her posters on bus stops and billboards so that her message can be seen by a wide audience. The bus company Stagecoach has already agreed to display her Fixers posters on their buses and coaches.

‘I think if the public could get behind farmers a bit more and support them. It would be a much better community for farmers all round’.

Click here to see all of Lorna's campaign posters.