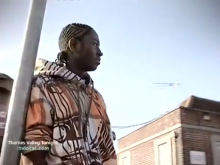 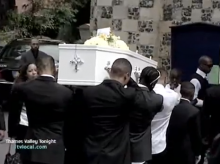 The funeral of Robert Spence 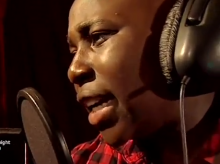 Nyasha recording a track on the peace album

Following the stabbing death of his friend in May 2008, Evans Amankwah (20) from Reading has become a Fixer to educate young people about the lethal consequences of carrying a knife.

Hi friend, Robert 'Junior' Spence, was just 17 years old when he was stabbed to death after trying to break up a fight on the street.

‘I didn’t believe it,’ Evans explains. ‘It affected everybody really bad; we thought if it had happened to him, there is a higher chance it could happen to us’.

Devastated by the loss, Evans along with a group of Robert’s friends decided to form ‘Youth Against Violence’ – a group dedicated to stopping knife crime in their community.

With the help of Fixers, the group set up a website and put together a peace album with music written by young people wanting to stop street violence.

A story about their Fixers campaign was broadcast on ITV News Meridian in November 2008 (watch above).

As a part of the Fixers project, Evans and his group were also invited to speak to students about street violence and to discuss why some young people feel the need to carry a knife.

‘I thought I was the only one who felt the pain,’ adds Evans. ‘But there are a number of people out there who have also felt the pain.

‘Through the media we can reach thousands in just a minute. Fixers is helping us achieve that goal.’