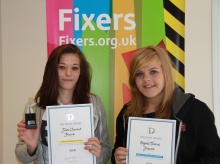 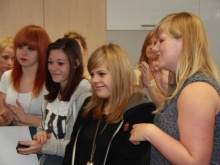 Jade and Sophie receiving their awards in Winchester

Fixers Jade Clement (17) and Sophie Thorne (18) have received the prestigious Diana Award for their Fixers campaigns and using their personal experiences to help others.

Jade from Poole won the award for her campaign to combat drug addiction among young people.  Turning to her own experiences of being addicted to cannabis, Jade created a film with Fixers warning young people of the dangers of using drugs. (Click here to watch her Fixers film.)

Her courage in turning her life around and becoming a mentor to other teens has been recognised with a ‘courageous citizen’ award in memory of the Princess of Wales.

On receiving the recognition, Jade said: ‘This is such an amazing honour. It makes me feel that all those dark times I went through were somehow worth it because now I am helping others and that has been recognised.’

Sophie from Swindon received the Diana Award for being an 'anti-bullying champion'. She drew on her experiences of being cyber-bullied for her Fixers campaign. Her Fixers film, which is animated in parts, shows the different forms of cyber-bullying and encourages victims to speak up and seek help. (Click here to watch her Fixers film.)

‘I am so happy,’ said Sophie, after finding out she had won the award. ‘I want to use my experience to help stop other people going through the nightmare I did. This award makes me feel like I am making a difference and that is exactly what I set out to do.’

The Diana Award was established in 1999 as a lasting legacy to Diana, Princess of Wales’ belief that young people have the power to change the world.