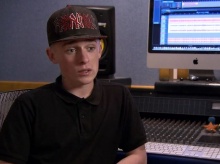 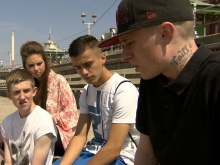 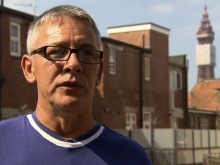 Jamie Hardman's life began spiralling out of control when he became addicted to drugs at 16. But after rediscovering himself through music two years ago, the now 20-year-old has left his past behind to help others avoid a life of drugs and crime.

His story was featured on ITV Granada Reports on Thursday 8th August.

The Blackpool Fixer went from smoking marijuana with his friends to being addicted to Class A drugs and committing crimes to fund his habit.

‘When I was on the drugs, it felt good. I didn’t care about what my family thought - I just wanted to fit in,’ he says.

‘I got addicted when I was half way through college and ended up dropping out. That’s when all the crime started.’

It wasn’t until he was 18 that Jamie discovered his passion for music, got clean and turned his life around. He began writing and performing rap music with positive messages.

‘The big change happened when I got into music, now I’m able to write about my experiences. It’s made me realise what I was doing with my life.’

The 20-year-old is creating a music video with Fixers, which he hopes will send out a message to teenagers to make positive choices for themselves and steer clear of drugs.

He is targeting 14 to 21-years-olds, because he feels that’s the age when people are more likely to be influenced.

‘The message that I want to get across to young people is work hard, go to school and get a job,' he explains.

‘We need to be educating people from the very beginning, otherwise Blackpool’s finished and these children are finished with it.’