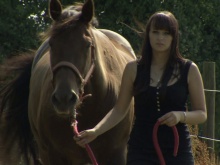 Fixer Lorna on the farm 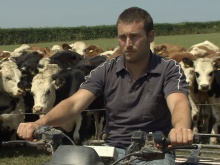 Lorna's partner, Tom, is a farmer 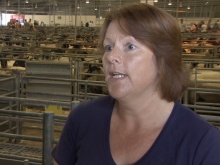 To many people, farming seems like an idyllic and perhaps simple life.

But few realise that having a career in agriculture is far tougher than what many people imagine, with the strain making farmers three times more likely to commit suicide.

In order to shed light on the pressures farmers face, Fixer Lorna Keight, whose partner is a farmer, is creating a poster campaign to encourage support from the public.

Lorna (22) admits she was surprised by the work farmers do.

‘Before I met Tom, I thought farming was just an easy job – it seemed they just all had days off in the sun,’ says Lorna.

‘But it’s also a lot of hard work and it shocked me, and I want to open the eyes of the British public as well.

‘It makes me sad to know there are farmers who get to the point where it is too much for them. I think if the public could support farmers a little more, perhaps the suicide rates would drop.’

Lorna’s partner Tom, who is the third generation in his family to farm his land in Doddycross, Cornwall, says there are many obstacles in his trade.

‘One of the biggest challenges is the weather, both for livestock farmers and arable farmers,’ he explains.

‘It’s very much that you are tied to the farm a lot of the time – having livestock you have to work 365 days a year to make sure they’re all fed and watered.’

Also in the piece Lorna speaks to other farmers about the hardships they face, and to Pam Wills from the Royal Agricultural Benevolent Institution who works with farmers facing distress.

For more information about support for farmers, visit the Farm Community Network website.