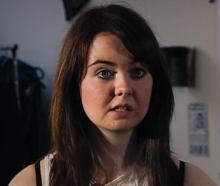 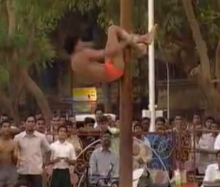 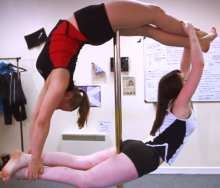 Fixers from Stirlingshire have completed their film aiming to improve the way pole fitness is perceived, and hope it will be used as a fitness resource in school PE lessons.

Sheree Morrison (18) and her team of aerial acrobats say the activity is often mistakenly associated with ‘pole dancing’, and want their film to remove misjudgements and encourage more people to consider it as a serious sport.

Looking at how it can help fitness and self-confidence, in their film, the Fixers of Wolanski’s Pole Fitness in Stirlinghsire, look at where the activity started encouraging more people to give pole fitness a chance.

‘If anyone came to one of our classes and had these misconceptions, they would change their mind within ten minutes,’ says Sheree.

‘So much strength is involved, and I just want people to consider it as a normal sport like gymnastics is.

‘I started it because I thought it would be a fun way to keep fit, but it’s so much more than that as well. I’ve met some great people.’

The film looks at the origins of pole fitness - tracing it back to the traditional Indian sport of Mallakhamb.

Fellow 22-year-old Fixer, Ryan Harkins started pole fitness to get stronger and says boys shouldn’t shy away from what most people think is a female activity.

‘It’s not just for females - you have to use your strength and fitness. I would say it’s definitely better than the gym,’ he says.

‘Pole dancing is used in gentleman’s clubs as a form of performance entertainment, but pole fitness is completely different.’

Ryan thinks there’s a lack of information out there explaining the difference between the two activities and feels this is what may deter some people away.

You can watch their film at the top of this story.