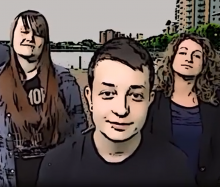 Fixer Alfie Austin with actors in the music video 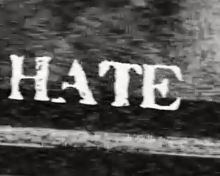 Example of words displayed on TVs in music video 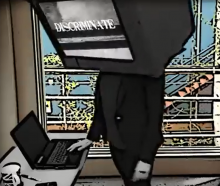 Fixer Alfie Austin’s video - ‘So Now You Know’ - shows the media’s influence over society’s ‘negative’ stereotypes of the trans community.

The 19-year-old from Salford will be sharing the video on various social media sites to reach as many people as possible.

‘I think the internet is the best place to get this message out, because I want to get to as many people as possible,’ says Alfie.

As a way of symbolising media bias, the music video begins by presenting people as ‘TV Heads’ with negative words displayed across the screens.

As the piece goes on, the screens crack and the individual underneath is revealed.

Alfie, who was born female, hopes his video will stop people from judging the trans community.

[Click here to watch his story, shown on ITV News.]

‘We wanted to show how the media can brainwash people with ideas and pre-conceptions that may not be true.

‘Transgender people are like anyone else, and that’s the message I want people to understand.'

Alfie, who wrote and sang the lyrics in the video, someday wants to perform for a living.

He says his Fixers project has been a great way to release his emotions.

‘I’ve found the whole experience a way to open up about how I’m feeling inside.

‘Of course I’ve had ups and down since coming out as trans, but you can’t always let someone know how you feel.

‘With music there are no boundaries, you can release anything you’re feeling.’

You can watch Alfie’s music video above.

Alfie's project was supported by the Wellcome Trust.