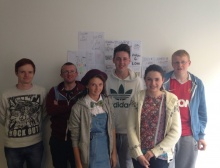 Cillian (left) with group of Fixers 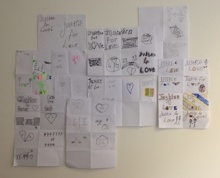 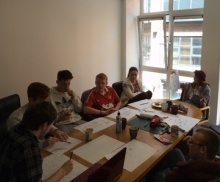 The Fixers at group meeting

A group of change makers from Belfast, who think many young people where they live are afraid to come out, are hoping their unconventional poster campaign will help combat homophobia in their community.

With the help of Fixers, Cillian McGivern (17) and his team are creating ‘wavy’ posters, which will be used as a metaphor for a person, promoting the idea that 'Not All Posters Are Straight' – just like people.

The group of Fixers all identify as heterosexual, but say they’ve seen friends discriminated against for being gay.

According to a 2010 survey, one in four gay people in Northern Ireland have made a complaint about homophobia at work.

The Fixers want to address this issue to encourage tolerance and acceptance of LGBT people in their city.

‘We want to change people’s perceptions about homophobia, so that everyone is treated fairly. Everyone has human rights to be treated equally,’ explains Cillian.

‘Just because we’re not gay doesn’t mean we can’t see the problem.’

A 2010 poll revealed Northern Ireland had the smallest openly gay and bisexual community in the UK.

The group think people from the LGBT community are reluctant to discuss their sexuality where they live for fear of ridicule or abuse.

‘There’s a sense that this is something that isn't addressed in Northern Ireland very well. People should be accepted for who they are rather than be afraid for they safety,’ Cillian adds.

The team of Fixers are targeting 16-20 year olds in their area, hoping their posters will empower young people to be true to themselves.

They intend to display the posters at various youth centres and schools in Belfast.