No Need to Speed 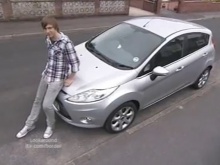 Kyle with his car 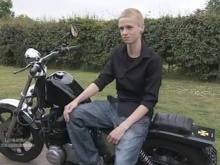 Mackenzy and his bike 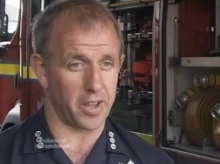 Two Fixers, concerned by young drivers who race their cars in their rural area, speak to ITV News Lookaround about their Fixers campaign aimed at improving road safety among young drivers.

Fixers Mackenzy Cochrane and Kyle Baird (both 18) have seen friends crash their cars and motorcycles, because they are overconfident on the roads following their driving test.

To tackle this recklessness, the Fixers from Workington, Cumbria, are creating a leaflet containing images of car wreckages and accident injuries to show the potential consequences of speeding.

‘When people pass their tests, immediately a lot of them start racing one another,’ says Kyle.

‘A friend of mine was doing 70mph on a 30mph road. He came to a really sharp corner and flipped his car. The car was an absolute mess.

‘It gave us all a wake-up call – not just him – of just how bad speeding can be.’

In their film, the Fixers speak with a number of young drivers about road safety, and also hear from Workington Fire Station Manager, Kevin Bethwaite, who thinks the Fixers campaign will be a success.

‘We do not very often see this from a young person’s perspective, so if they can get their message to their peers and people they share cars with, than people will be more likely to listen,’ he says.

The Fixers hope their campaign will spread beyond their town and into youth centres, universities, and driving schools across the UK.

Kyle adds: ‘Just because you have passed your test does not mean you are a good driver. We just want to let people know that there is no need to speed.’