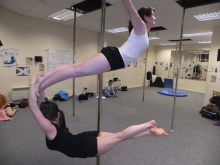 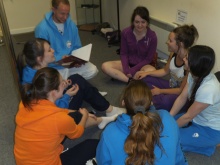 Fixers taking about their project 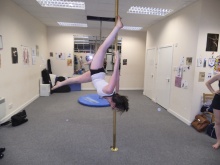 Fixer demonstrating how it's done

A group of Fixers, wanting to change negative perceptions about pole fitness and aerial acrobatics, are using a film to show the origins of the activity.

Sheree Morrison (18) of Stirlingshire, Scotland, wants to show people how the concept of pole fitness started, and how this variation of pole dancing does not fulfil the ‘sleazy’ stereotype.

The group, who are part of Wolanski’s Pole Fitness in Stirlingshire, are aiming their project at 15-25 year olds as well as health professionals who the Fixers feel are most apprehensive about this unique fitness routine.

Pole fitness mixes modern dance with gymnastics, and sees participants perform tricks and holds using the pole, either on their own or with others.

Sheree has been participating in classes for 10 months and insists it certainly helps her fitness: ‘I was looking for something different to do and it had been something I had wanted to try,' she says.

‘I have changed so much since I started. My confidence has massively improved, my fitness level is a lot better than it would be if I was just going to the gym, and the social aspect means I’ve become part of a family who all enjoy doing the same thing.’

Using a pole for fitness has been traced back several hundred years to the traditional Indian sport of Mallakhamb.

However, pole fitness or 'pole dancing' is more commonly associated with exotic dancing, and it is this stereotype which the team want to address.

‘I want to change the negative perceptions surrounding pole fitness and show people that it's not just something for girls to be involved in,’ Sheree adds.

‘The stigma attached to pole fitness is outdated and far too many people still see it as a dirty thing for women to be involved in.

‘We want people to start seeing the benefits in terms of health and physical exercise.’