Reinforcing The Road To Recovery 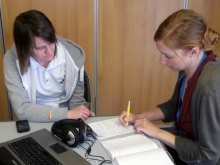 Sarah talking with her YPC Katie 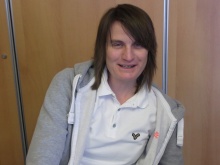 A young woman, who spent 14 months in rehabilitation to cure an alcohol addiction, is creating a documentary film with Fixers, showing the realities of alcoholism.

Fixer Sarah Whitcher (25) hopes the film will make people consider the reasons behind alcohol addiction, how easy it is to get hooked, and how common it is for reformed addicts to relapse into alcoholism.

Like a lot of young people, Sarah started drinking when she was 18 years old and would often go out with her friends.

But some of her friends had a negative impact on Sarah's life as they went from weekend binging to drinking as a habit.

Sarah’s level of drinking affected her judgement and her behaviour. She became increasingly aggressive towards other people, had violent outbursts, and was sent to prison on three occasions for various crimes.

Sarah, who now lives in Plymouth, was sent to rehab to try and get off alcohol, but feels she has had little support to prevent relapsing into alcoholism since leaving rehab.

With the help of Fixers, Sarah wants to encourage more support for young people who are currently dealing with alcohol addiction, or trying to stop returning to it.

‘Alcohol takes over your life, and it ruined mine,’ says Sarah. ‘But I was gutted when I came out of rehab as there was no support for me.

‘I have relapsed three times since leaving rehab in February, and it’s taken relapsing for me to get some support with a local alcohol service.

‘For me, alcohol and crime went hand in hand, and that is why I have to stop myself relapsing. But it is not just me who needs more support – there are lots of young people who need help to stop alcohol addiction,’ she explains.

Government statistics estimate that 15,000 young people (16-25yrs) seek specialist alcohol addiction help each year in the UK. According to Drink Aware, young people exposed to alcohol before their teens are most likely to become addicted during adulthood.

‘I hope that by making a documentary, I’ll be able to highlight to local decision- makers and beyond the need for more support for addicts to stop other young people going through what I went through.’