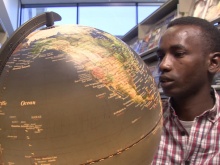 Abdul tracking his journey on a globe 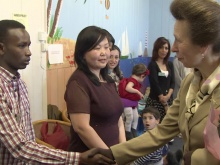 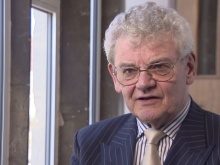 David Rowland from the Harbour Project

A young Fixer, who fled Sudan following a war where most members of his family were killed, tells the story of his nine-year journey to safety in the UK as part of a project to stop young people judging asylum seekers.

Abdul Musa Adams (16) grew up in Darfur, a war-torn area of Sudan in Africa. At eight years old, he returned from a day working out on the fields with his brother to find his village destroyed by the pro-government Janjaweed militia.

Abdul’s family had been killed, but he and his brother survived by hiding in a tree. Abdul fled his country and journeyed to Chad with his brother, but he became separated from his brother 18 months after becoming a refugee there.

After three years in Chad, Abdul walked through Libya where he remained until moving on in 2011. He spent time in France on the streets before coming to the UK on the back of a lorry.

He now lives with his foster mum, Ira, in Swindon and is adjusting to his new life after a nine-year long journey across Africa and Europe seeking safety.

Abdul hopes that by recounting his story, he can make young people aware of the conflicts that force many asylum seekers into different countries, and hopes people will show more compassion to those seeking refuge.

‘I felt like I have been on the run,’ Abdul explains. ‘For nine-years now, I have been trying to get away from trouble.

‘My life used to be in tatters, moving from one place to another - from Sudan to Chad, from Chad to Libya. I am still haunted by this past, and even now I am having sleepless nights.

‘But the main thing I think about here is that I am no longer hearing the sound of guns. I joined Fixers to send a message out to young people to be aware of the conflicts abroad, and give help to those who need it.’

The piece also features David Rowland from the Harbour Project – a Swindon-based group which is helping Abdul settle into life in the UK – and shows Abdul meeting Princess Anne who paid a visit to see the work being done in Swindon to help asylum seekers.