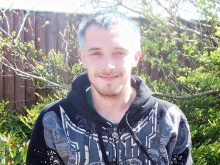 Vince looking at the camera 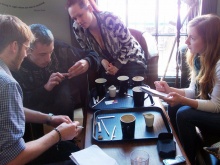 Vince discussing his resource at a meeting with the Fixers team

A Fixer, who was told he was lucky not to be paralysed or dead following an accident on his motorcycle, is raising awareness of the dangers bikers face by being too confident on the roads.

Vince Bardell (23) was in intensive care for three months after he collided head-on with a lorry and was told by doctors he was lucky to be alive.

Vince, who was 17 at the time, had not long passed his bike test and was riding a motorcycle which was too powerful for him.

He soon lost control of the bike after the rear tyre exploded and went underneath the front of an oncoming truck, where he was wedged for two hours.

Vince broke his collar bones, his neck, and his legs, and could not walk for one month. He still feels the effects now, particularly in his legs.

‘I tried to jump from a small engine bike onto a much bigger, more powerful one, and it was a massive mistake,’ he says.

‘It is tough to go from a small bike that you ride to pass your test onto a bike which is so fast and big to control. I’ve been down that road, and it did not end well for me. But I was overconfident and too naïve at the time.’

Vince’s friend, Danny, died in a motorcycle accident not long after Vince recovered from his. Vince admits that he would still be ‘driving around like a lunatic’ if it was not for Danny’s death.

Vince, from Bridgwater, Somerset, hopes to make a short film with Fixers which focuses on the dangers of riding a motorbike, highlighting statistics of fatalities on the roads in the process.

Figures from Somerset County Council claim that although motorcycles only make up 1% of UK road traffic, 20% of people killed in road accidents are motorcyclists.

Vince adds: ‘Bikes can be dangerous. Now I want others to see the dangers not just of moving too quickly onto bigger bikes, but also the dangers of riding dangerously on the roads. You can hurt yourself and others, and I want people to think about that.’